"A Letter to Bob Kaufman" by Neeli Cherkovski 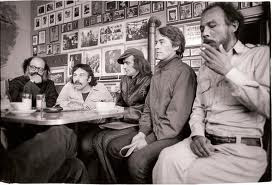 At the Cafe Trieste, North Beach, San Francisco, 1975.
Left to right: Allen Ginsberg, Harold Norse, Jack Hirschman,
Michael McClure & Bob Kaufman. Photo by Diana Church, from
http://haroldnorse.com/tag/bob-kaufman
A LETTER TO BOB KAUFMAN
(For Bill Morgan)
Do you hear me, Bobby Kaufman, I
push a crate of olives
uphill, it’s Telegraph Hill, my days are numbered
and so it’s time, we’ll eat again
at the  Wacky Way and drink
at Li Po Bar, and you will stumble home
many starry Van Gogh nights, most impeccable man
of Bayou Saint John, come, come, come love,
come bouncing your T. S. Eliot, Wallace Stevens,
Federico Garcia Lorca balls up and down Grant Avenue
until the gendarmes disarm you
and take you downtown
Do you remember my genius rebel black rabbi
old union organizing Five Spot dread of a dream
when I was leaving the jail, freed by the mayor
who had placed a call and you were being brought in
for public drunkenness, “go home, Go home, I’ll see you
in the morning,” you said
and there you were, a thin and wiry miracle
before the door of Caffe Trieste
singing “Prufrock”: and whispering in a grating whisper:
“Music is feeling then, not sound,” o Bobby
I see you on the cover of every book
in my library, I find your words in all the books of poems,
I believe it when you die and we sprinkle your ashes
on San Francisco Bay one clear afternoon
tossing sad beatitudes astern, Ferlinghetti in Greek
Sailor’s cap telling me he’ll retire someday
and live in a boat tied to the docks
“Poets don’t retire,” I told Lawrence.
“But I’ll be old.”
“They don;t grow old, Lawrence, they grow
ancient,” and now he’s 93 and you
are floating in the Bay waters
as it rains.  The Li Po still exists, no one knows
where Eileen is, your wife, mother of you son,
and Lynn is gone, she who called one morning
to say, “The poet Bob Kaufman is dead.”
now it’s March, 2012,
we call you the golden sardine and
the ancient rain. it’s raining so hard
right now,” Oh Bobby, I live with a doctor
from The Philippines, we are on the south slope
of Bernal Hill, time bends, time bleeds,
I love to make your bed at Harwood Alley
which now has your name
in a distant long-ago past Oz and Xanadu
and see you curled up in there
against a passage, in favor of the deep
in San Francisco Bay
Neeli Cherkovski
16 March 2012
http://www.neelicherkovski.com/ 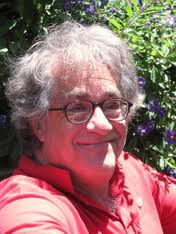 Neeli Cherkovski
Neeli Cherkovski (Santa Monica, CA, 1945) has written many books of poetry, including: From the Canyon Outward, the award-winning Leaning Against Time, Elegy for Bob Kaufman and Animal; two biographies, Bukowski: A Life and Ferlinghetti; his book, Whitman's Wild Children, a collection of critical memoirs, has become an underground classic. Since 1975, Neeli has lived and worked in San Francisco. His papers are housed at the Bancroft Library, UC Berkeley.
His latest book is "From the Middle Woods:" http://www.amazon.com/From-Middle-Woods-Neeli-Cherkovski/dp/1883197074/ref=sr_1_5?s=books&ie=UTF8&qid=1332272221&sr=1-5
Posted by Christopher Luna at 12:45 PM 2 comments: