100 Thousand Poets for Change in Vancouver and Portland

Niche/Angst poet laureate and Ghost Town Poetry founder Christopher Luna invites Vancouver and Portland writers and artists to participate in the largest poetry reading in history on Saturday, September 24. 100 Thousand Poets for Change, a global event uniting writers who believe in the power of language to create social and political positive change, is a grassroots effort in which anyone can participate. The intention is to find ways to bring your message to the larger community through outdoor events and readings in non-traditional places. This is why I did not plan an open mic at a bookstore or coffee shop. Each of you can create your own event or get together with a few friends.
Starting at 1pm I will be reading and writing poems outside Niche Wine and Art Bar, interacting with passerby and providing help and advice to poets who would like to participate. However, in the spirit of the event, please feel free to initiate and execute your own activities. Then send all poems and photographs to me at christopherjluna@gmail.com or post them as a reply on our 100 Thousand Poets for Change blog: http://www.bigbridge.org/100thousandpoetsforchange/?cat=46
Niche is located at 1013 Main Street in Vancouver, WA, next door to the New Kiggins Theatre.
Please read the press release below for more information about this historic event.
Contact: Michael Rothenberg
100 Thousand Poets for Change
P.O. Box 870
Guerneville, Ca 95446
Phone: 305-753-4569
http://www.100TPC.org
walterblue@bigbridge.org
100 Thousand Poets for Change Organizes Largest Poetry Event in History
Number of Participants Worldwide Growing Daily
650 events in 450 cities and 95 countries will take place on September 24 to promote environmental, social, and political change. Poets, writers, artists will create, perform and demonstrate in their communities, and decide their own specific area of focus for change within the framework of peace and sustainability, which founder Michael
Rothenberg stated, “…is a major concern worldwide and the guiding principle for this global event.”
Bob Holman and Margery Snyder, in a recent article on About.com said, “the beauty of the concept of 100 Thousand Poets for Change is that it is completely decentralized and completely inclusive.” All those involved are hoping, through their actions and events, to seize and redirect the political and social dialogue of the day and turn the narrative of civilization towards peace and sustainability.
Poetry demonstrations are being organized in political hotspots such as Madison, Wisconsin and Cairo, Egypt. Poetry and peace gatherings are planned in strife-torn Kabul and Jalalabad.
In Mexico there are over 30 events, with 18 poetic actions in Mexico City, where poets as well as environmental and political activists are hoping to encourage reflection and creative responses against systemic violence through the written and the spoken word with day long street events, readings and workshops. More than a third
of these events are organized by collectives actively working towards a non-violent approach to solve the country's most pressing problems.
To date there are over 260 events in the United States. There are 20 events statewide in North Carolina where teacher/poets have mobilized to protest cuts in education funding. And along the Platte River near Omaha, Nebraska, poets will be demonstrating against TransCanada’s planned Keystone XL tar sands pipeline. More examples of events can be found at the 100 Thousand Poets for Change www.100TPC.org. Each event organizer has an Event Location blog page on the website for posting, poetry, artwork, photos, and video to document this global mega-event across national borders.
Immediately following September 24th all documentation on the 100TPC.org website will be preserved by Stanford University in California, which has recognized 100 Thousand Poets for Change as an historical event, the largest poetry reading in history. They will archive the complete contents of the website, 100TPC.org, as part
of their digital archiving program LOCKSS.
Founder Michael Rothenberg is a widely known poet, editor of the online literary magazine Bigbridge.org and an environmental activist based in Northern California.
For information contact: http://www.100TPC.org
Contact: walterblue@bigbridge.org
Phone: 305-753-4569
Posted by Christopher Luna at 1:13 PM No comments:

Partners In Truth and Beauty September 2011: An Interview with Sean Patrick Hill, author of The Imagined Field and Interstitial

“Poetry, for me, is a kind of yoga, a discipline, a practice of awareness. It involves, for me, scrutiny, meditation, arguing.” 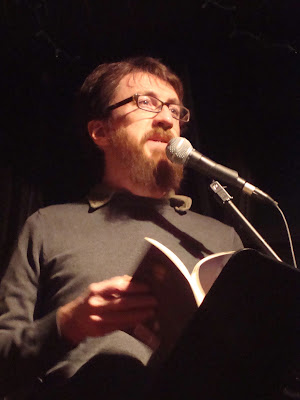 Partners in Truth and Beauty: Sean Patrick Hill
interviewed by Christopher Luna
I know few people as dedicated to the craft of poetry as Sean Patrick Hill. Since we first became acquainted, he has challenged me and the other writers around him to learn more, push harder, think deeper.
Hill grew up in upstate New York before moving to Oregon, where he lived for many years before settling in Kentucky with his wife, Erynn, and their daughter, Teagan. Sean has earned degrees from the University of Buffalo and Portland State University, and is currently a graduate student at Warren Wilson College. He has been the recipient of fellowships to the Vermont Studio Center and Montana Artists Refuge. His poetry and reviews have appeared in Rain Taxi, Bookslut, Redactions, Gulf Coast, and the Oregonian. You can find out more about him and his work at The Imagined Field
Sean Patrick Hill’s poetry recovers the forgotten landscape of our collective history as it bears witness to the fall of the American empire. He wanders the ruins as a solitary figure, perhaps the last of us, observing the desolation as he longs for a past that preceded even his birth. White is a common color throughout The Imagined Field (Paper Kite Press, 2010), evoking not clarity but the confusion of snowblindness. Hill inventories our broken promises, laments our failed relationships and faulty memories. He takes us to task for failing to value the land as well as the people who reside upon it. 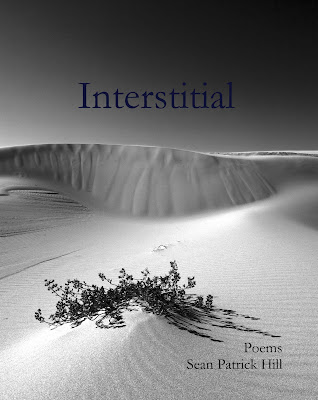 Interstitial (BlazeVOX [books], 2011) is filled with melancholic, dream-like observation of small towns including his hometown of Elmira, New York. Poems such as “A Road We Cannot Travel Without Damaging” (Interstitial, page 33) wrestle with the legacy of manhood.
A Road We Cannot Travel Without Damaging
Flagstone makes as good a paving stone as token of a grave.
Everything here is stone—the ruined abbey.
The megalithic tombs worked by men like us.
Rather, the stone works us.
Our ancestors hardly filled their clothes.
Your mother cooked potatoes; your father worked
nights in a glass factory.
You married young and had a stranger for a son,
I know.
It is the palace of our blood.
I too have been proud of my vicious hands.
Hill’s poetry is the inner dialogue of a man in search of himself, and his country’s broken promise. The book is a devastating portrayal of failed marriages and the consequences of unregulated capitalism.


The poet’s voice resembles the inner monologue of the seeker, hoping to recover what has been lost, and fearful that it may be too late. Poems like “Down in the Flood” (The Imagined Field, page 48) represent an endless search, and a tireless desire to discover the answers to the big questions. The journey is marked by rich imagery and precise, imaginative phrasing that will linger long after you’ve finished reading. Spend some time with Sean Patrick Hill’s work, and you will come to understand that we are fortunate to have him as a guide. 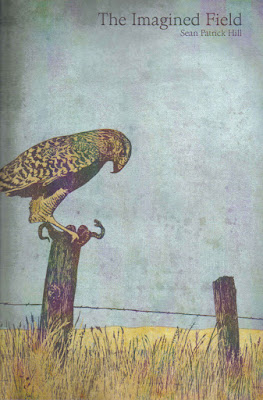 Is The Imagined Field inspired by Robert Duncan's Opening of the Field? If so, what does that book means to you? How has it informed your writing?

There are a lot of things behind the title, Duncan being part of that, yes. As a matter of fact, it is you yourself who first loaned me the book and turned me onto Olson. So really, the title is inspired more by Olson's essay on Projective Verse. I had that idea in mind (and I had read [Olson’s] "The Kingfisher" a number of times), but Duncan is also working out the same ideas. 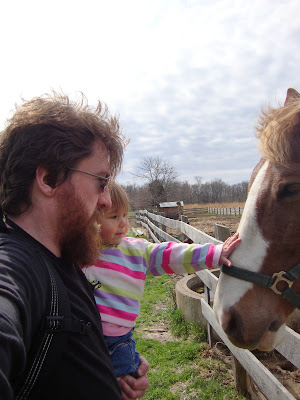 Sage Cohen, author of Writing the Life Poetic and The Productive Writer
Posted by Christopher Luna at 12:46 PM No comments:

40 Questions Upon Turning 40 by Christopher Luna

40 Questions Upon Turning 40
by Christopher Luna 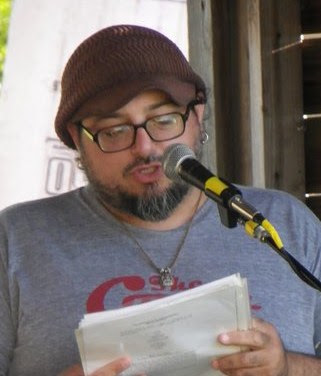 Christopher Luna in Newberg, OR August 2011
Photograph by Mary Slocum
Am I really wiser than my 20-year-old self, or have I merely
attained a more highly evolved version of the same old foolishness?
How much time do I have?
Can I get it together?
Can I flip the script?
Can one live in the moment while preparing for an uncertain future?
How can I prevent myself from allowing habit-forming thoughts to guide my actions?
Do the friends I have left behind, and the friends who have left me behind, know that I love them still?
Am I full of shit?
Can I quiet my mind?
If I quiet the mind, will the poetry continue to come?
Am I doomed to remain forever in debt?
What prevents me from reaching my full potential?
Will I ever stop being furious at the faithful?
Would opening my heart to the religious serve any purpose?
Who am I to judge?
Why am I so self-righteous?
Why do I miss opportunities?
Am I compassionate enough?
Am I fooling myself?
Am I aware of what is in front of me, or are my eyes clouded by ignorance?
Will I ever be able to forgive her?
Is there no way to stop Angelo, my soon-to-be teenaged son, from concluding that I am an imbecile?
What if I am an imbecile?
Will he be able to hold on to his sweetness?
Will he spend two decades (or more) convinced that I am a fool, as I did with my parents?
How can I be a better partner to Toni, who has provided me such sweet sanctuary and devotion?
Can I control my appetite?
Is insatiability a consequence of karma or temperament?
Is this going to be fun?
Will I find the answers I seek, or just new questions?
Are humility and aesthetic excellence mutually exclusive?
How do I avoid becoming an arrogant prick in sheep’s clothing?
Do I bore people?
Are they interested in my passionate rants, or are they just being polite?
Is it really possible to love everyone?
Does it matter that there are some whom I dislike with an intensity approaching fury?
Is self-analysis a trick of the mind, a distraction, mental masturbation?
Have I learned anything?
How can I be a better man?
What discoveries await me in my fifth decade?
Christopher Luna
September 10, 2011
Posted by Christopher Luna at 10:59 AM 1 comment: