Art is my Religion: Seeing Prophets of Rage with Angelo

Art is my religion. Every useful lesson or profound revelation I have benefited from was conveyed to me through poetry, music, dance, painting, or film. Of these, music is the most participatory. As an audience member, you can dance, sing along, scream, and freak out as the music moves through you and transforms you on the spot. I have been truly blessed by many transformative concert experiences over the years.

My son is the best thing in my life, the source of my deepest love and sense of pride. He is a remarkable person—a thoughtful, funny, philosophical, young man who challenges and mazes me every day.

Since he was born, I have dreamed of sharing a live concert experience with him. When he was a toddler, I took him to a few, including one of his first favorites: They Might Be Giants. The parents out there know that at a certain point the reliably goofy TMBG began making children’s music, and they are great at it. Their children’s songs have become so popular that when they tour they have to make clear which dates are kids’ shows and which are adults only. I’m sure that Angelo does not remember the trip he made with me and his mother to Waterfront Park in Portland, OR. By the time the band took the stage, he was a sleep in his stroller, and he did not wake up. Therefore, this early attempt to share live music with him doesn’t really count.

I had offered to take him to shows before. There have always been bands and songs that both of us like such as Muse, the Black Keys, Talking Heads, Mika, and the White Stripes. However, he had no interest in seeing a live show. He did not even seem open to the idea. While I found this baffling and disappointing, I’m not the type of Dad to force him. When he was young, I often took him to poetry readings and art shows, but once he got old enough to look after himself, I always left the decision up to him. I was aware that if I jammed poetry and art down his throat that I could become the reason he grew to hate them. Today my son has a real appreciation for the arts that might not have been possible if I had laid some kind of heavy expectation on him.

I was very excited to learn about the formation of Prophets of Rage, a band consisting of members of three of the best hip hop bands of all time: Public Enemy, Cypress Hill, and Rage Against the Machine. POR formed in response to the depressing shit show of the current presidential campaign. Disappointed in both of our choices, and disgusted by the current state of affairs, POR nevertheless believes that we all have a responsibility to get involved. When I learned that PIR was coming to the amphitheater in Ridgefield, WA, I had to be there. My wife Toni and dear friend Tiffany planned to buy me a ticket for my birthday.

I saw an opportunity to share this experience with my son when I learned that AWOLNATION would be touring with POR. Apparently, AN signed on to help POR drum up ticket sales by using their current popularity to persuade young people to buy tickets for a supergroup featuring members of bands whose popularity peaked in the 1990s. When I told Angelo that AWOLNATION would be there, he got very excited. Toni and Tiffany agreed, and it was settled.

Before the show we bought t-shirts, had some pizza and Dutch Bros. coffee. As we waited to go in, I told him some stories from my years of going to shows. I told him about the countless women in denim and leopard print clothing at the KISS show. Told him about the first time I was able to spot a narc, walking around tripping before a Dead show. I also recounted hanging out in the parking garage outside the venue in Albany because my Dead ticket was counterfeit, and the time I danced for a long time to “Drums/Space” before finally opening my eyes to realize that I was the only one on the floor who was standing. No one tried to get me to sit down. They just let me do my thing.

Both Angelo and I agreed that the opening act, WAK RAT, had a dumb name. We also shared the same opinion of their music. We enjoyed the metal trio’s sound, but found their lyrics to be really dumb. The lead singer was a very good bass player, and the drummer and guitarist were reliably aggressive. The lead singer had a folksy, working class way about him which I liked. He sang like a regular guy. Unfortunately, when he tried to make political statements he was completely unintelligible. I liked WAK RAT much better during the instrumental parts of their songs. Despite all this, Angelo enjoyed the first set enough to suddenly declare that he’d like us to go to see Blue October or Dirty Heads together.

The true fulfillment of my dream occurred the moment that AWOL NATION took the stage. Immediately Angelo was on his feet—swaying, dancing, pumping his fist, clapping or else obeying every instruction. I was filled with an incredible happiness, to finally share one of my most meaningful experiences with my son. Angelo even enjoyed a seminal concertgoer’s moment of joy when AWOL NATION played “Dreamers,” the one song he really wanted to hear. I loved being able to facilitate my son’s first transcendent musical moment. 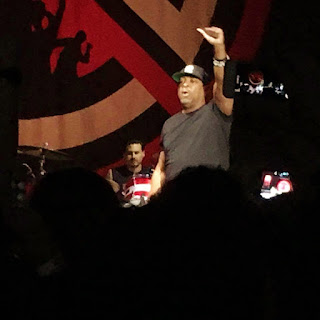 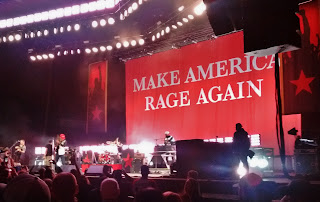 Even though Prophets of Rage played many songs he didn’t know, he was familiar with some of the Rage Against the Machine songs as well as a few of the hip hop tunes they played. While they played more RATM than anything else, I was very happy with the rest—“Fight the Power,” “Bring the Noise,” “She Watch Channel Zero,” “Miuzi Weighs a Ton.” B Real did a great job on the vocals for the Rage songs, and of course, they played all the big Cypress Hill tunes. I was also thrilled that Toni had bought us tickets that were close enough to the stage for me to see Tom Morello’s fingers move across the frets and his facial expressions. The love he has for the music, and for the fans, was written all over his face. Chuck D has been doing this for a long time, but he showed no signs of tiring. His energy remained high, and his booming bass voice remains as strong as ever. 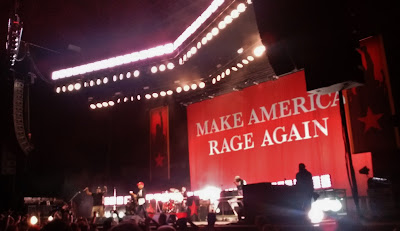 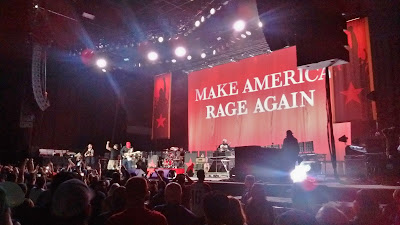 I have had a hard time enjoying many of the shows I’ve seen in the PNW because the crowds have been so lame. No matter how great the performance, people regularly shout people down when they try to dance. This always makes me wonder why some people go to live shows at all. If you’re not moved enough to stand when the musicians are present, why not stay home and sit on your ass while listening to the CD. It’s lame and infuriating. Fortunately, the crowd at Prophets of Rage stayed on its feet for the entire show. Everyone danced, leapt, bounced, sand, and hollered together. I sang along to nearly every song, and nearly blew out my voice, which would not have been good since I had a reading the next night. 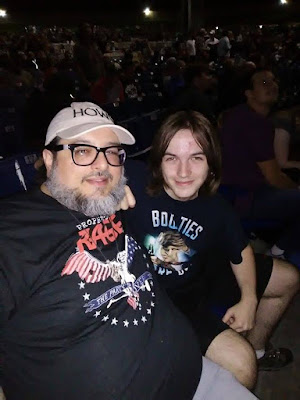 I had a great time dancing and singing and freaking out side by side with Angelo. I can die happy.
Posted by Christopher Luna at 4:58 PM No comments:

After sharing the bill with Lisa Loewenthal at Burnt Tongue 16 at Crush Bar in Portland on May 21, I made a point of letting her know how much I had enjoyed her stories. She immediately asked me to tell her what I had liked about them. A fair question which I utterly failed to answer. I was being sincere, yet I had not prepared a detailed critique, and was not prepared to articulate my feelings. I left feeling that I had a disappointed her, and possibly made a bad first impression.

This encounter was on my mind when Lisa and I shared the bill again (along with the amazing Celeste Gurevich) at Josh Lubin's spectacular series, Salon Skid Row, at The Corner Bar in Portland on June 14. so as I listened to her, I wrote the following poem, which I post here to honor her greatness.

Below I have also posted some pictures from the event.

“I have to hear every word”

Let’s Not Get Caught Up in All This Truth Now. Harvey Keitel in the film Youth

Posted by Christopher Luna at 2:34 PM No comments:

"I hardly ever do this sitting down," a poem inspired by Bryce Schramm's performance at Paper Tiger Coffee in Vancouver, WA on June 15, 2016


“I hardly ever do this sitting down”
With love for Bryce Schramm
and all my friends at Paper Tiger Coffee
June 15, 2016 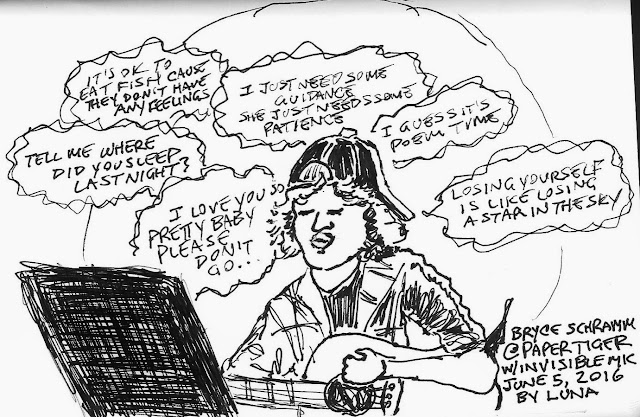 “Pretty interesting how we are, isn’t it?”

I hardly ever do this sitting down. Bryce Schramm
You have an instrument, and you put love into it, it’ll love you right back. Ty
She’s a strip tease. Toni Lumbrazo Luna
I need to touch something wild. Herb Stokes
Pretty interesting how we are, isn’t it? Rainy Knight

Posted by Christopher Luna at 4:52 PM No comments: