I had a feeling that Sharon Wood Wortman would not be able to stay away from bridges for long. Check it out:

Bridge Walks Raise Funds for
The Big & Awesome Bridges of Portland & Vancouver--A Book for Young Readers
Sunday, October 30, 2011
Saturday, November 19, 2011
1-4 p.m.
Meet at Floyd’s Coffee, NW First and Couch
Bicycle racks available at ODOT, 123 NW Flanders
City Center parking garage at 90 NW Davis
Served by TriMet lines 4, 8, 35, 44, and 77 and two nearby MAX stops
Cost $55, includes a Portland-Vancouver Bridges poster
One Hundred percent of proceeds to Big & Awesome
Sharon Wood Wortman, author of three editions of The Portland Bridge Book, comes out of bridge walking retirement to lead two bridges walks to raise funds for creating and printing the first children’s book about the local bridges, The Big & Awesome Bridges of Portland & Vancouver—A Book for Young Readers.
Ride by bike, then lock up at the Oregon Department of Transportation as we visit the Region 1 bridge museum and Traffic Management Operations Center. See several bridges along the downtown waterfront, then visit the Burnside Bridge and meet the bridge operator. Bridge mechanics and weather permitting, watch a test lift while standing mid-span or inside the bridge tower. Once the traffic is stopped and gates are down, participants are free to walk mid-span to lie down and be “road kill” and live to tell about it. In another group exercise, participants build triangles with their bodies to feel tension and compression. Appropriate dress is recommended. Participants are also invited to bring a favorite bridge poem.
A project of PDX Bridge Festival, Inc., a 501(c)(3) charitable organization, Big & Awesome is the first bona fide book about the local bridges written for young readers. The goal is to donate free copies to PPS third grade classrooms and Vancouver School District fourth grade classrooms. To register, email sharon@bridgestories.com. Those who cannot walk but wish to make a donation may visit www.bridgefestival.org. All donations are tax deductible. Other questions? Call Sharon at 503.330.0900.
Partners as of October 21, 2011: Geotechnical Group of the American Society of Civil Engineers Oregon Section, THA Architecture, KPFF Engineering, TY Lin International, Portland Ironworkers Local 29, Society of American Military Engineers, Parsons Brinckerhoff Engineering, Nutter Family Foundation (Vancouver), Missionary Chocolates, and several individuals--every person, organization, and foundation to be acknowledged in Big & Awesome.
To buy a Portland-Vancouver Bridges poster with the art of elementary students featured in Big & Awesome, visit A Children’s Place Bookstore, Powell’s on Burnside, or Broadway Books in Portland and Cover to Cover Books in Vancouver.
Posted by Christopher Luna at 4:43 PM No comments:

My kinda crowd to multi-tendril through, a collage poem for Dan Raphael by Christopher Luna

I'd like to dedicate my latest collage poem to Dan Raphael, Dan Nelson, and all of my friends at Paper Tiger. That evening's performances were particularly good. However, as always, it was the nervous chatter and offhand comments in between poems that struck me.

It was an honor to follow Dan Raphael, whose kindness and generosity have made me feel welcome in the Northwest, and whose work continues to inspire me to do it my way and trust that others will pick up what I'm putting down. His performances show us how it's done. His professionalism and grace remind us that it is possible to be a poet who is confident in his or herself without being an asshole. 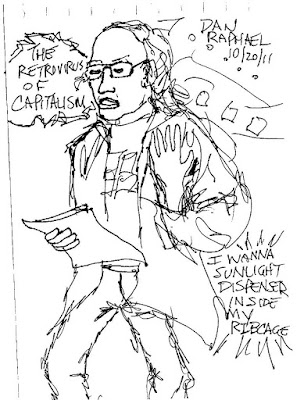 Rainy night in an Irish sweater. You introduce the meat. Is this the meat in the middle? He’s gotta nice case for it. Mine’s in a box. Wanna take Dan to the GWAR show. Perhaps his enormity will shield me as we are showered in fake semen and blood. That’s entertainment.

Bad women. Bad whiskey. Depression and a little red wagon. Mysterious 50 beckons. Somebody at the back of the room grunts. Dog monger lover in an Irish sweater prepares to smash the state. My kinda crowd to multi-tendril through. Cavalcade of new liminalists talk shit about papa poet. Glowing tablets impart metempsychotic miracles.  Beat that drum. Time isn’t my best sense. We’ll tower while we can. 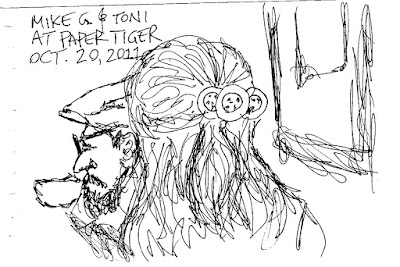 The Beauty: A poem to congratulate Leah Jackson on the one-year anniversary of Niche Wine and Art Bar

Congratulations to Leah Jackson for creating the coolest spot in the 'Couve. Late last year, Leah honored me by naming me her poet laureate. I didn't know an individual could do that, but Leah is not the kind of person to ask permission. She is the kind of person who makes things happen. Niche is a classy, fun, beautiful place to be, the food is amazing, and the wine is exquisite. I am proud to play a small role in the beauty Leah is nurturing there. Leah has supported me in many different ways since we first met. She has done more than anyone I know to make Vancouver, WA a place where poetry, art, and music thrive.

Here is the poem I wrote in her honor and presented at Niche's one-year anniversary on Saturday:

The Beauty
some hide it
while others wave it
in your face
unsolicited
some plant a seed
others born to tend
still more simply benefit
from the fruit
of their generosity
our hostess
extends her arms
to surround our light
in a canopy
of evergreen
digs in
don’t let go
builds the stage
hangs the art
lays the foundation
while we sleep
if you want to thank her
get in line
may have to make an appointment
she’s too busy making things better
for all of us
a bard needs a bicycle
a poet needs a mic
a painter needs a wall
a songwriter needs a muse
everyone needs a song
sounds like it was written
especially for you
a citizen needs a drink, companionship,
and a splash of beauty now and then
you’re not alone
you’re not invisible
not insignificant
when it begins to feel as if
no one notices
no one knows you’re there
when you begin to feel you’re on your own
remember there’s a perfect niche
down the street
waiting just for you
With love and respect for Leah Jackson
On the first anniversary of Niche Wine and Art Bar
In gratitude for her service to the community
Christopher Luna
Poet Laureate, 2011
Posted by Christopher Luna at 11:24 PM No comments: 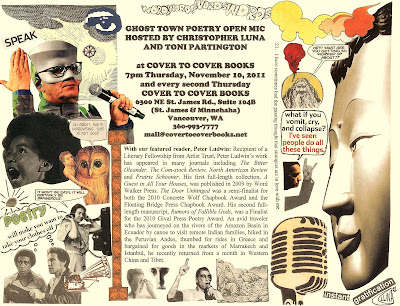 GHOST TOWN POETRY OPEN MIC
HOSTED BY CHRISTOPHER LUNA
AND TONI PARTINGTON
Presented by Printed Matter Vancouver
http://printedmattervancouver.com
at COVER TO COVER BOOKS
7pm Thursday, November 10, 2011
and every second Thursday
COVER TO COVER BOOKS
6300 NE St. James Rd., Suite 104B
(St. James & Minnehaha)
Vancouver, WA
360-993-7777
mail@covertocoverbooks.net
christopherjluna@gmail.com
With our featured reader, Peter Ludwin:
Peter Ludwin is the recipient of a Literary Fellowship from Artist Trust.  He was the Second Prize Winner of the 2007-2008 Anna Davidson Rosenberg Awards, and a Finalist for the Muriel Craft Bailey Memorial Award.  For the past ten years he has been a participant in the San Miguel Poetry Week in San Miguel de Allende, Mexico, where he has workshopped under such noted poets as Mark Doty, Tony Hoagland and David St. John.  His work has appeared in many journals, including The Bitter Oleander, The Com-stock Review, North American Review and Prairie Schooner, to name a few.  His first full length collection, A Guest in All Your Houses, was published in 2009 by Word Walker Press. A chapbook, The Door Unhinged, was a semi-finalist for both the 2010 Concrete Wolf Chapbook Award and the Floating Bridge Press Chapbook Award. His second full-length manuscript, Rumors of Fallible Gods, was a Finalist for the 2010 Gival Press Poetry Award.  His poem “Terezin Concentration Camp, Bohemia,” was nominated for a 2010 Pushcart Prize.  An avid traveler who has journeyed on the rivers of the Amazon Basin in Ecuador by canoe to visit remote Indian families, hiked in the Peruvian Andes, thumbed for rides in Greece and bargained for goods in the markets of Marrakech and Istanbul, he recently returned from a month in Western China and Tibet.
Tagong: the Wild West
by Peter Ludwin
A pack of dogs roams the muddy street
that bisects this one-horse Tibetan town,
and a dead one stains the sidewalk with its corpse.
Rough-looking Khampas gather by their motorbikes.
In the clinic, a young Chinese doctor
gives me a three-hour IV and a shot to bring
my fever down.  Obama! he says.  Kobe!
On the mountainside, prayer flags thick as stars.
Notes from a Sodbuster’s Wife, Kansas, 1868
by Peter Ludwin
What really got us in the end—
we women who didn’t make it,
who withered and blew away in the open—
was the wind.  Space, yes, and distance,
too, from neighbors, a piano back in Boston.
But above all, the wind.
In our letters it shrieks hysteria from sod huts,
vomits women prematurely undone by loneliness,
boils up off the horizon to suck dry
their desire as it flattened the stubborn grasses.
Not convinced?  Scan the photographs,
grainy and sepia-toned, like old leather.
Study our bony forms in plain black dresses,
our mouths drawn tight as a saddle cinch,
accusation leaking from rudderless eyes, betrayed.
I tried.  Lord knows I tried.
Survived the locusts and even snakes
that fell from the ceiling at night,
slithering between us in bed.
I dreamed of water, chiffon, the smell
of dead leaves banked against a rotting log.
I heard opera, carriage wheels on cobblestone.
Cried and beat my fists raw into those earthen walls.
The wind.  Even as it scoured
the skin it flayed the soul,
that raked, pitted shell.
And how like the Cheyenne,
appearing, disappearing,
no fixed location,
not even a purpose one could name.
Posted by Christopher Luna at 9:20 PM No comments: