When I learned that Cecil Taylor had died, I was reminded that I had neglected to post the videos of duo B.'s visit to the Northwest in August 2016.

duo B. is a powerhouse improvisational group featuring my old Naropa classmate Jason Levis on percussion and Lisa Mezzacappa on bass. It was truly an honor to work with both of them. Their sets consisted of music inspired by Cecil Taylor's work. I decided to write a poem in honor of Cecil Taylor, and Jason and Lisa agreed to include it in our collaboration.

I saw Cecil Taylor play piano on two occasions. The first was a solo set in Boulder, CO as a part of "Beats and Other Rebel Angels," the Jack Kerouac School of Disembodied Poetics's week-long tribute to Allen Ginsberg. I loved the performance, but there were many people in the audience who couldn't handle it. Many walked out before the Taylor finished playing.

Years later I saw Cecil Taylor play with Elvin Jones at the Blue Note in New York. They played one 45-minute tune that contained multitudes. It was a deeply satisfying and indescribable experience.

Many thanks to Leah Jackson of Angst Gallery and Elisa Saphier of Another Read Through for providing a venue for our work. I am also grateful to my friend Tiffany Burba for documenting the proceedings. 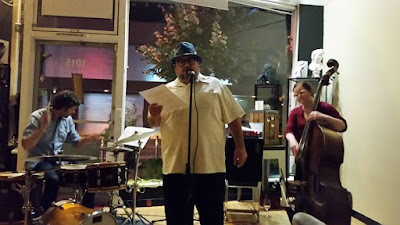 
duo B. at Another Read Through

duo B. with Christopher Luna at Another Read Through

Join us on August 3 for a special appearance by the Bay Area’s duo B., a free jazz drums and acoustic bass duo, who will be performing a set inspired by the music of pianist Cecil Taylor. Their performance will be followed by a collaboration between Jason Levis, Lisa Mezzacappa and Clark County Poet Laureate Christopher Luna. Luna and Levis worked closely together for two years as students attending the Naropa Institute from 1997-1999.

Christopher Luna is the Poet Laureate of Clark County, WA where he works as a poet, artist, editor, publisher, and teacher. He is the host of Ghost Town Poetry, a popular open mic poetry series at Cover to Cover Books in Vancouver, WA. Luna is co-founder, with Toni Partington, of Printed Matter Vancouver, a small press that also provides editing and coaching services to writers. He is also the editor of "The Work," a monthly poetry newsletter created to inform poets about events in Portland, OR and Vancouver, WA. Christopher Luna's collage art is available through Angst Gallery in Vancouver, WA.

***
duo B., the San Francisco Bay Area improvising and composing ensemble of percussionist Jason Levis and bassist Lisa Mezzacappa, is a musical think tank of grand schemes and impossible scenarios. For more than ten years, the ensemble has developed and refined its singular approach to improvisation and composition, through cross-disciplinary projects with film, collaborations with improvising instrumentalists at home and abroad, study of repertoire by like-minded composers such as Jon Raskin, Aaron Bennett and Phillip Greenlief, and immersion in the improvised-composed musical worlds of masters Wadada Leo Smith, Anthony Braxton, Henry Threadgill, and others. duo B. has released two recordings, on the Evander and Edgetone labels, and has served as the crack rhythm section for West Coast reed heroes Cory Wright, Phillip Greenlief, and others.

This year, duo B. has embarked on a new journey in long-form improvisation with its latest project, an exploration of the musical vision of pianist Cecil Taylor, re-imagined for bass and drums. 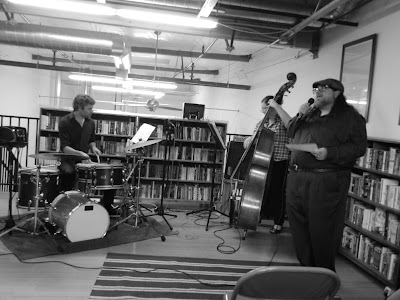 The Architecture of Poetic Vision
by Christopher Luna
For Cecil Taylor

love song/ rapid/ raging/ fearless/ collage/ of all the colors/ give me more! young and confident/ poets who perhaps attempt to levitate/ develop monuments to the flowering of the senses/ good times with Ginsberg, Chet Baker/ manuscript and a walking stick/ gift from Kerouac/ Beat began in an apartment shared by Allen, Peter, Leroi, and Bob/ they had to give it up to Hamp, and also to Little Richard/ always preferred Fats/ if you love Ellington, you end up writing orchestrarily anyway/ Zoot just listened/ which is all you can ask of anyone/ beware the “smothering of the great American spirits/ oh, they’re going to get you!”

got some music for you

but sometimes you have to wait/ typically charged onslaught/ piano rocks with laughter/ all time stops…the largesse of the spirit lights you up inside/ build through composition a kind of architecture of sonorities to create the three dimensions/ create the utmost that is possible/ what kind of poetic vision are you attempting to attain?/

beware the smothering/ these things do happen

learned as much from Marvin Gaye as from Thelonious Monk/ James Brown is really a genius/ the most important thing about music/ is the rotation of the earth as it moves through the rays of the sun/ the seasons happen in a cyclical manner/ it is how we come into being/ fucking is just rhythmical, you know/ American Indians here stomp/ it is rhythm/ it is acknowledging the food and the Earth/ that’s why that four-letter word beginning with ‘J’ and ending with ‘Z’ is so inadequate

it’s a heightened time now, a time of spiritual intake/ some art work transcends the dominance of empires/ empires fall/ the magic—as opposed to logic—and spirituality/ manifest itself in a concrete edifice of form/ there is a deeper joy/ which has saved us/ and because of the joy there is an understanding/ poetic vision/ when light is thrust out/ there is a deeper joy/ it has no parameters/ it continues to move

these things do happen

Watrous, Peter. “Cecil Taylor, Long a Rebel, Is Finding Steady Work.” New York Times May 10, 1991.
Here are photos from both performances. My thanks to Tiffany for those pics that I did not take: 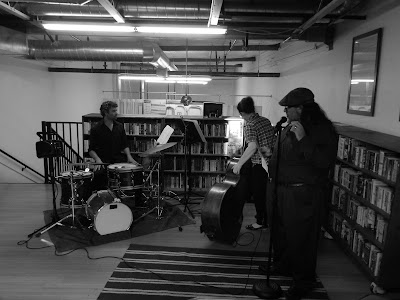 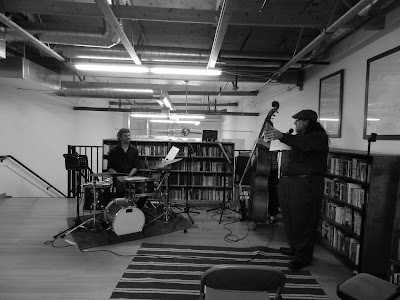 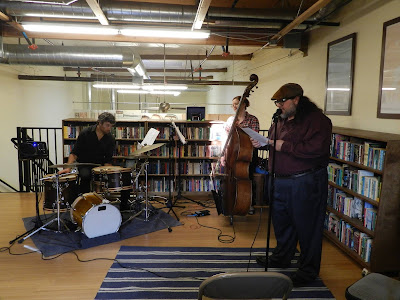 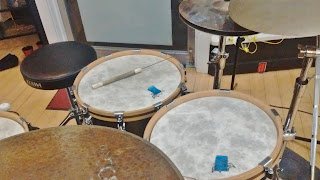 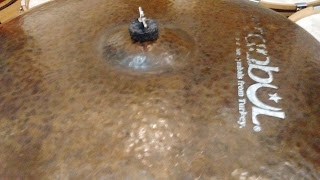 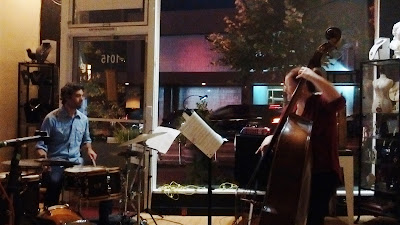 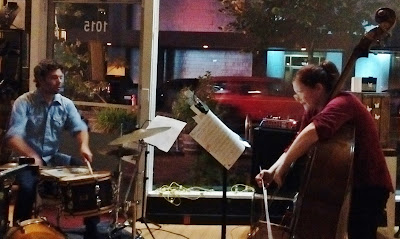 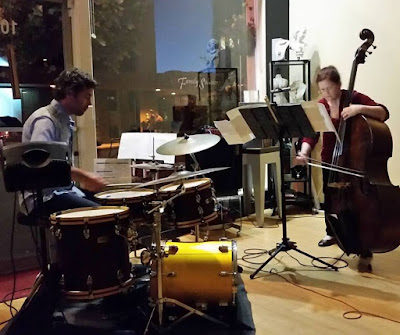 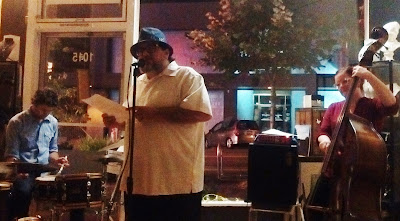 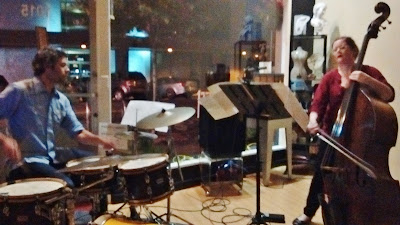 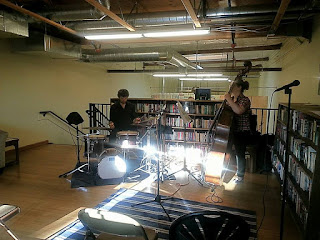 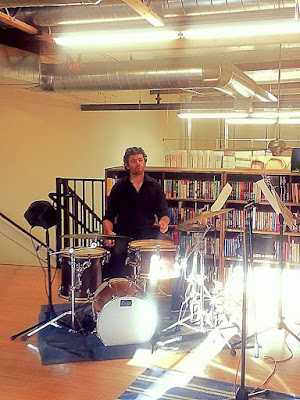 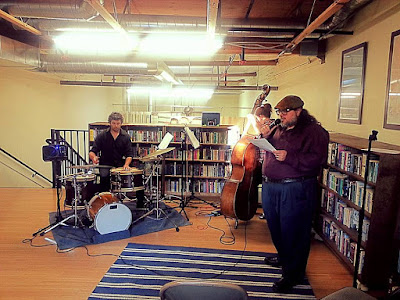 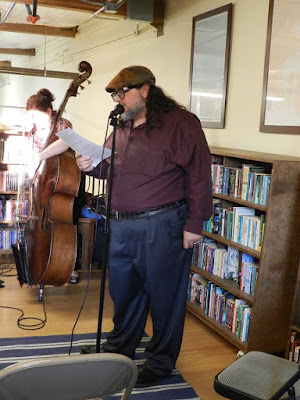 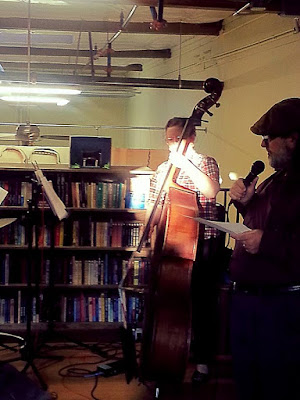 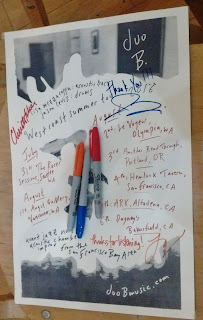 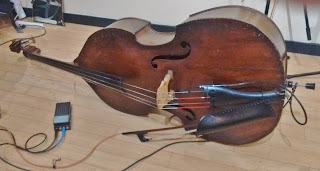 Posted by Christopher Luna at 11:27 PM No comments: