NOT MY PRESIDENT Reading at Angst Gallery April 14, 2018


NOT MY PRESIDENT reading 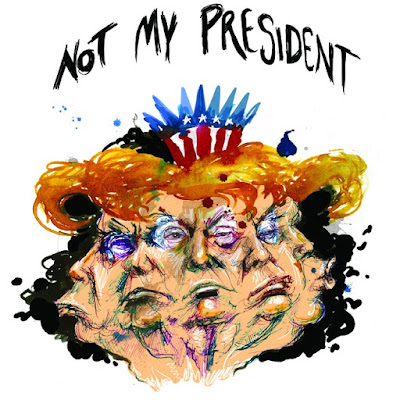 
Poems and Stories from NOT MY PRESIDENT: The Anthology of Dissent

Thoughtcrime Press gathers voices from around the world in NOT MY PRESIDENT, including National Book Award winners, visual artists, New York Times Best Sellers, poets laureate, singer-songwriters, high school students, and children of illegal immigrants, all united in their opposition to the policies of Donald Trump. A copy of this book has been sent to the Tweeter-In-Chief and to every member of the United States Congress.

Order your copy of NOT MY PRESIDENT here.

Thoughtcrime Press founder and Captain Josh Gaines ditched a promising military career to write books, run a profitless press, and build blanket forts with his daughter. He earned a writing MFA at The School of the Art Institute of Chicago. His fiction has been published in Two Cities Review, Nebula Rift, and in London's, Dark Mountain. His poetry appears in numerous anthologies and journals, most recently in Blue Monday Review, Drunk in a Midnight Choir, and Yellow Chair Review, and in his own books of poetry and flash fiction: Cigarette Sonatas, and little bones. Josh is the editor of Not My President, the Anthology of Dissent and was the 2016 and 2017 Fiction Writer in Residence at Art Farm Nebraska.

Gail Alexander writes on a river in Vancouver, WA. NOT MY PRESIDENT is her first publication.

Sossity Chiricuzio is a queer femme outlaw poet, a working class crip storyteller. What her friends parents often referred to as a bad influence, and possibly still do. A 2015 Lambda Fellow, she writes as activism, connection, and survival, and is found in publications like Adrienne, NANO fiction, Porkbelly Press, and Lunch Ticket, and in anthologies like Not My President, The Remedy, and Glitter and Grit.

Christopher Luna served as Clark County, WA’s first Poet Laureate from 2013-2017. He has an MFA from the Jack Kerouac School of Disembodied Poetics, and is the co-founder, with his wife, Toni Partington, of Printed Matter Vancouver, an editing service and small press for Northwest writers. He has hosted the popular Ghost Town Poetry Open Mic in Vancouver, WA since 2004. Luna’s books include Brutal Glints of Moonlight, GHOST TOWN, USA and The Flame Is Ours: The Letters of Stan Brakhage and Michael McClure 1961-1978.

Elizabeth Stansberry has been writing poetry for 3 decades. She graduated from Idaho State University with a bachelor's degree in English.  Miss Stansberry has participated in Portland open mics and poetry slams since 2014. Miss Stansberry has also been published in  Skyline Review, Oregon Artswatch, The Eclectic Muse and a Write Around Portland Anthology, Mile Marker.  She is a secretary at Prosper Portland and does on call security at the Portland Art Museum.

Adam Strong is a Digital Arts teacher and the author of the novel Bella Vista. His work has appeared in Nailed Magazine, The Gravity of the Thing, and in the anthology City of Weird. He curates the reading series Songbook PDX. He writes and loves in Portland, OR.

Nathan Tompkins is a writer living just outside of Portland, though his heart will always be back in North Idaho. His work has appeared in many publications including WindFall: A Journal of Poetry of Place, Drunk Monkeys, and Anti-Heroin Chic. He's the author of five chapbooks, the latest being Uncomfortable Adventures.

Posted by Christopher Luna at 10:24 AM No comments: