Art by Christopher Luna and others at Angst Gallery in September 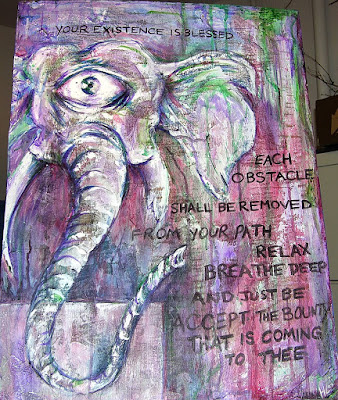 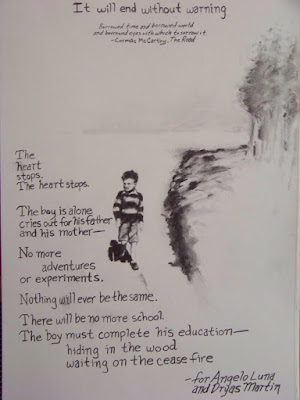 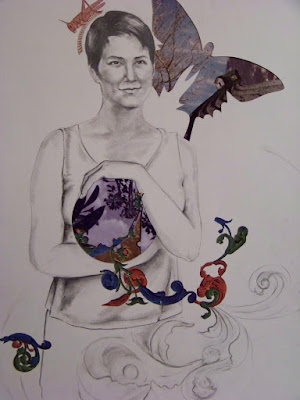 There are only a few more weeks to see "Words," a great exhibition of collaborations between, poets, painters, songwriters, and visual artists at Angst Gallery (http://www.angstgallery.com/) at 1015 Main Street in downtown Vancouver, WA. I have six pieces in the show: four with Erin Madarang, and two with Harry Lane. I am also proud to report that the show includes visual art and poetry by my friends Eileen Elliott, Jim Martin, and Toni Partington.
Above I have posted some photographs, but like all art, you cannot fully appreciate the work without seeing it in person.
The first two images are paintings by Harry Lane, which he gave to me to amend. I added words to both. The first is called "Word Bombs." The second is called "Opener of Ways," and is based on harry's knowledge of my affinity for Ganesh, the Hindu remover of obstacles and god of literature.
Here is a poem, which also appears in Ghost Town, USA (available through the author or by contacting Angst or Cover to Cover Books http://www.covertocoverbooks.net/) about my collaboration with Harry. the last line of the poem refers to a line in a poem by Diane DiPrima (http://dianediprima.com/) in which she writes "the only war that matters is the war against the imagination." In fact, I sent this poem to Diane as part of the 2008 postcard poetry project.
EYE CATALYST for Diane di Prima we are charged with a responsibility whether we take on the role of observer, critic, priestess, or shaman my painter friend is a former Kansas ninja and the reincarnation of a ninth-Century warrior who smokes to quiet the voices in his head and understands that to name may also be to destroy he brings me finished canvasses which I am invited to amend according to my liking my Sharpie-holding hand trembles with a sense of obligation whatever I choose to add must be right, must be worthy must move, add rather than take away we get trashed, laugh and rub our beards mark of our status as revolutionary perverts we are dangerous create word bombs to dismantle capitalism and undo the hatred in the human heart while plotting our respective strategies
in the ongoing war against the imagination
Then there are three collaborations with Erin (there isa fourth in the show, but I do not have a picture of it).
The first is "YOUR SISTER, YOUR MOTHER, YOUR LOVER, YOUR FRIEND," based on a poem of mine with the same title.
The second is called, "It will end without warning," based on a poem about fear and mortality which I dedicated to my son Angelo and my friend Dryas Martin.
The third is a self portrait of Erin which she very bravely handed over to me to supplement. Erin and I really enjoyed collaborating and we are working on some additional pieces. Please stop by Angst, support local artists, and let gallery director Leah Jackson know that you support her efforts to foster and nurture the arts community in Vancouver.
Posted by Christopher Luna at 1:22 AM