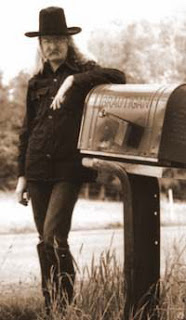 Richard Brautigan
﻿
On January 13, Vancouver poet Christopher Luna will host a special open mic poetry reading and celebration of the poet Richard Brautigan at the Clark County Historical Museum, the location of “Autumn Trout Gathering,” an exhibit on Brautigan that will close January 30. Luna’s monthly second Thursday poetry reading is currently touring various poetry-friendly venues in downtown Vancouver while Cover to Cover Books, which has been home to the series since January 2007, recovers from a fire that took place in October. This partnership between the local poetry community and the museum, brokered by Luna and CCHM Executive Director Susan Tissot, is an opportunity to bring new visitors to the museum while also exposing the vibrancy of the literary scene to the museum’s current patrons.

Although admission to the reading is free, Christopher Luna strongly encourages all in attendance to contribute a small donation to the museum, which has agreed to stay open nearly six hours past closing time for this event. The community is also encouraged to bring a favorite Brautigan poem to read in the open mic.

Richard Brautigan, born in Tacoma in 1935, left the Pacific Northwest in 1956 when he moved to San Francisco, where he rose to international prominence as the author said to best capture the spirit of the counterculture during the late 1960s and early 1970s. He is best remembered for his novel “Trout Fishing in America” (1967), his poetry collection “The Pill Versus the Springhill Mine Disaster” (1968), and his collection of stories “Revenge of the Lawn” (1971).

In his 1971 novel “The Abortion: An Historical Romance 1966,” Brautigan envisioned a fictitious Carnegie library where anyone could deposit a copy of their self-authored book. Brautigan’s imaginary library inspired Todd Lockwood, a Brautigan fan in Burlington, VT, to start The Brautigan Library in 1995 to bring Brautigan’s vision to reality. For a number of years The Brautigan Library collected manuscripts but a lack of sustained funding forced it to close in 2000.

The January 13 reading will begin at 7:00 and will include a presentation by Washington State University-Vancouver professor John Barber, a personal friend of Richard Brautigan who developed and continues to maintain the Brautigan Bibliography and Archive (www.brautigan.net). This online narrative database is recognized to be the pre-eminent resource for information about Brautigan, his life, and writings. Additionally, Barber led the negotiations to move The Brautigan Library (www.thebrautiganlibrary.org) to Vancouver, where it is now a permanent, interactive exhibit at the Clark County Historical Museum.

A current exhibit at the Museum, entitled "Autumn Trout Gathering," celebrates the reopening of The Brautigan Library through never-before-seen photographs of Brautigan, multimedia, and various ephemera celebrating his literary career. Barber is a faculty member in The Creative Media & Digital Culture Program at Washington State University Vancouver.

“Autumn Trout Gathering” runs through the end of January 2011 and features photographs of Richard Brautigan by photographer Erik Weber, and posters and other memorabilia from Brautigan’s readings in San Francisco. The exhibit will also include video and sound installations created by WSU-V students and staff. Co-curators for the exhibit are Dr. John Barber and Jeannette Altman, both of WSU-V.

CCHM is now the permanent home of The Brautigan Library, a unique collection of more than 300 unpublished manuscripts from writers around the world and inspired by Washington-born author Richard Brautigan. The relocation of The Brautigan Library to Vancouver results from a partnership between CCHM and Washington State University-Vancouver’s Creative Media and Digital Culture (CMDC) Program to finalize arrangements with the estate of the late author and the Brautigan Library Foundation in Burlington, VT. According to Barber, “The Brautigan Library is not about publishing, or even literature. Instead it provides everyday writers a public shelf where their unpublished manuscripts, free of restrictions on content or quality, are available for anyone to read. It is a very public and democratic home for personal narratives in a digital age.”

CCHM is located in Vancouver’s 1909 Carnegie Library building. Regular museum hours are Tuesday – Saturday from 11 a.m. to 4 p.m. Admission fees apply. The museum also is open free from 5 to 9 p.m. the first Thursday of each month February – November for First Thursday Museum After Hours. A wheelchair accessible entrance to the museum is located on the east side of the museum building off 16th street.
Posted by Christopher Luna at 11:39 PM