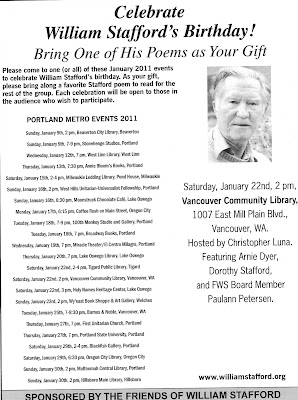 Paulann Petersen is Oregon’s Poet Laureate. She is a former Stegner Fellow at Stanford University whose poems have appeared in many publications including Poetry, The New Republic, Prairie Schooner, and Wilderness Magazine. She has four chapbooks—Under the Sign of a Neon Wolf, The Animal Bride, Fabrication, and The Hermaphrodite Flower. Her full-length books include The Wild Awake (Confluence Press, 2002), Blood-Silk (Quiet Lion Press, 2004), A Bride of Narrow Escape (Cloudbank Books, 2006), and Kindle (Mountains and Rivers Press, 2008). Her latest book, The Voluptuary, was recently published by Lost Horse Press. Paulann serves on the board for Friends of William Stafford, organizing the annual January William Stafford Birthday Events.

Arnold Dyer is a board member for Friends of William Stafford.

Christopher Luna is a poet and visual artist. He is the co-founder (with Toni Partington) of Printed Matter Vancouver and the host of the popular second Thursday open mic poetry reading at Cover to Cover Books. 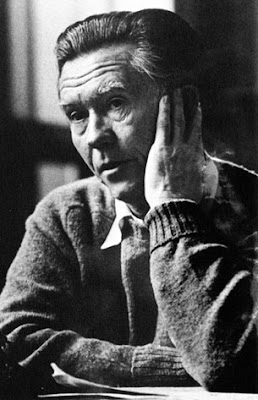 Film description (from http://www.everywar.com/): Haydn Reiss’s film Every War Has Two Losers is based on the journals of William Stafford, a conscientious objector in World War Two and National Book Award winner. Despite being told that war is inevitable, Stafford disagreed. He saw war as a choice – a human choice – and only one of the ways nations can respond to conflict. Using Stafford's eloquent poetry and prose, the film invites the viewer to reflect on their own ideas regarding war and how individual witness can contribute to a more peaceful world.