David Abel at Cover to Cover Books TONIGHT at 7 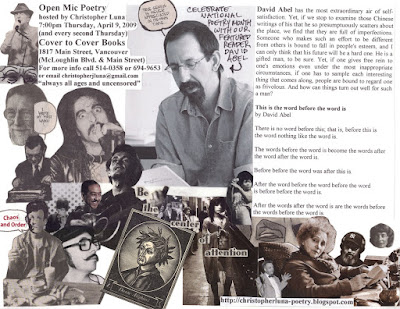 FOR IMMEDIATE RELEASE Spare Room collective organizer David Abel to read at Cover to Cover Books April 9. Contact: Christopher Luna 360-694-9653 christopherjluna@gmail.com Open Mic Poetry hosted by Christopher Luna 7:00pm Thursday, April 9, 2009 (and every second Thursday) Cover to Cover Books 1817 Main Street, Vancouver (McLoughlin Blvd. & Main Street) For more info call 514-0358 or 694-9653 or email christopherjluna@gmail.com “always all ages and uncensored” http://christopherluna-poetry.blogspot.com
Featuring David Abel: David Abel is a writer, performer, and multidisciplinary artist, as well as an editor, bookseller, and curator/organizer. Born in Salt Lake City in 1956, he has lived in Utah, Florida, New York, California, New Mexico, and Oregon. As an undergraduate at Deep Springs College, Bard College, and New Mexico State University, he studied language, literature, and music; in 1984 he was a member of the first class to graduate from the interdisciplinary MFA program of the Milton Avery Graduate School of the Arts, where he pursued studies in poetry, music, and video.
Abel was involved in the “downtown” literary and music communities in New York City in the 1980s, appearing often with composers and artists such as Jackson Mac Low, Franz Kamin, Charlie Morrow, and others. He edited the newsletter for the New Wilderness Ocarina Orchestra and assembled the book-and-media store for the 12th Annual International Sound Poetry Festival in 1980; opened and operated the Bridge Bookshop from 1987–89; and co-directed Granary Books gallery and shop in 1990–91. From 1994–96 Abel maintained Passages Bookshop and Gallery in Albuquerque, New Mexico, where he also organized the Tangents Reading Series. In 1997, he moved to Portland, Oregon. In Portland, he has collaborated with many individuals and organizations on literary, music, film, theater, and intermedia projects. Abel was a member of the Four Wall Cinema Collective (2002–03), and is a founder and member of the Spare Room reading series (www.flim.com/spareroom), now in its eighth year.
Abel is the author of numerous chapbooks and artist’s books including Twenty- (Crane’s Bill Books), Let Us Repair (with Anna Daedalus; wax paper scissors), Black Valentine (Chax), and Threnos (with Katherine Kuehn). In the spring of 2007 he curated the exhibition By All Means: Artist’s Books and Objects for the New American Art Union (www.newamericanartunion.com), and produced and edited the collection of artists’ multiples that served as the catalogue of the exhibition. He has also contribued poems, essays, and reviews to magazines, anthologies, and exhibition catalogues. This is the word before the word is by David Abel There is no word before this; that is, before this is the word nothing like the word is. The words before the word is become the words after the word after the word is. Before before the word was after this is. After the word before the word before the word is before before the word is. After the words after the word is are the words before the words before the word is.
Posted by Christopher Luna at 10:53 AM