With Gratitude for Neeli Cherkovski 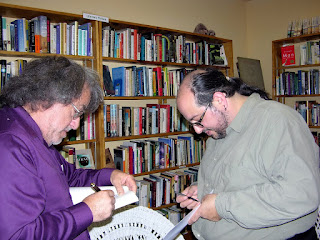 at Cover to Cover Books, October 30 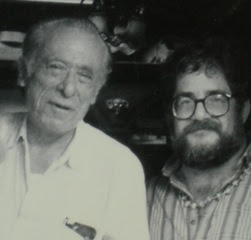 On October 29 and 30, San Francisco poet and biographer Neeli Cherkovski visited Vancouver, WA, where he was the featured reader at Cover to Cover Books and delivered a talk on “Bukowski: The Beats and other Rebellions.” Accompanied by his partner, Jesse, Neeli shared stories about his relationships with many of our favorite writers and artists, including Gregory Corso, Lawrence Ferlinghetti, and Willem DeKooning.


Neeli is a kind and learned man who was quite generous with the writers who questioned him about poetry. The Cover To Cover audience loved his Bukowski stories and enjoyed his memoir excerpt about an aborted visit to see Gary Snyder in his mountain home. Despite driving under the influence of LSD, Neeli remained the most sane of the three bohemians who made the ill-fated journey. Cherkovski’s recollection reads like a beatnik “Waiting for Godot,” with the elusive Snyder in the title role.

I was very moved by Neeli’s recitation of his own poetry, which flows down the page in skinny columns like pillars of tears. Like the best poets, his vulnerability is coupled with an inner strength and the eye of a seer. He read poems about former lovers and about his father, who Neeli described as a “great Dad” because he lived the life of a hobo.

On Friday, Neeli delivered a talk on “Bukowski, the Beats, and Other Rebellions” to a small, appreciative group that included Alex Birkett, local radio host Rich Lindsay, Eileen Elliott, Toni Partington, and myself. Neeli placed Buk in the great tradition of literary outlaws such as Blake, Villon, and Rimbaud. He told us that he and Bukowski met when Neeli was 16, and that they drank and bantered together for many years. He told us of Bukowski’s tenderness and his rages, and of the frustration and disappointment that old friends like Neeli felt when Bukowski went Hollywood and began hanging out with movie stars. In Neeli’s opinion, in his later years, Bukowski’s persona took over (Hunter S. Thompson went through a similar transformation). Neeli still prefers Bukowski’s early lyrical poetry to his later work, which, in Neeli’s opinion, often self-referentially invoked the persona created by the cult of personality rather than the man himself.

Neeli informed us that Bukowski read voraciously and aspired to be a great novelist like Hemingway or Fitzgerald. Both Bukowski and Kerouac were influenced by Jack London, who had similar problems with alcohol. Bukowski was a working person, never without a job, who strove for normalcy in his personal life. He adored his daughters, and proudly paid for homes and cars with cash earned from his writing.

The morning of Neeli and Jesse’s departure, Toni and I joined them for breakfast at Eileen’s. Eileen had graciously offered her home to our visitors, and was a superb host. Neeli was happy to share stories about Ferlinghetti, Corso, Ginsberg, and other poets he has met in San Francisco over the years. I really picked his brain, and he delivered. We talked about poetic lineage (a concept I was introduced to by Anne Waldman when I was her student at the Jack Kerouac School of Disembodied Poetics) and the transmission of knowledge from one poet to another. He told us of being locked up during the reign of the notorious cop Bigorini (who harassed the great SF poet Bob Kaufman for years) for posting a flyer for a poetry reading. Neeli also met the painters Elaine and Willem DeKooning and Philip Guston through his uncle, the abstract expressionist painter Herman Cherry.

Neeli reminded me that The Question is more important than The Answer. Poets often take years to formulate the proper question.

Here is a brief mention of Neeli Cherkovski’s vist to the ‘Couve from the Columbian’s blog:

I want to thank Neeli Cherkovski and Jesse for driving all the way up here to see us. The poetry community will not soon forget it. I would also like to thank Cover to Cover Books and the Writer’s Dojo for hosting Neeli, and Eileen Elliott for taking care of them while they were here. Finally, I’d like to thank my partner, Toni Partington, whose ideas, organizing skills, and support, made this event possible.

Here is a poem I wrote for Neeli. It was inspired by his talk, as well as conversations we had about the “anxiety of influence.” The italicized phrases are Neeli’s words. My poem is followed by two poems that Neeli emailed after his trip.


If you live in a world absent of the gods

how do you find meaning?

a poem by Christopher Luna

If life fashions a writer
of the rock standing patiently
in the shadow of Everest
eking heart and soul
to spill forth from his
craggy granite skin
onto the soft earth
he need not be bitter
for the lifegiving waters
that gravity draws downward
into the sea
are made of the same stuff
that rolls over and through
the rock, providing nourishment
for the soil and vegetation
and animals in the valley.

It is enough to persevere
to observe and document
the elusive truth
and everpresent beauty
of the surrounding environs.

It is enough to conjure flesh and sinew
to attach themselves to the bones of the ineffable
through the sheer audacity it takes
to discover the question.


The truth is not as simple as it pretends to be.

I may never be a warrior, but I try to follow
the path blazed by Allen
Socratic Samurai of Shambhala
patron of the arts & PR master
who was himself a devotee of
Kerouac, Whitman, Blake, Pound,
& Trungpa

We are all called upon to lock horns
with our elders, bedecked in hawk headdress
in the lyric arena
forced to face our fathers
in the steel cage of influence

I see the bridge inside of time, and wish to paint
the various moods of the morning as in "The morning of the poem,"
or to move from within the body, or to plead for something more, something
akin to a garden behind a brick wall, gated, with warning signs: "Stay Away,"
but you find the gate unlocked, stay away
from explaining, let the image make its own statement, we come
in the wake of many leaves, dark brown, brittle red, passionate pale
yellow, the flames
of misfortune, we come
in time to listen-in on silence, in time
to hear the beating of a drum in the distance, it must be
the neighbor, or the first pre-rush hour cars, the bridges
are choked, my enemy
lives in the garden, yet I may sit there
at 6 a.m. and find invisible things
doing things, I stand in the midst of a
forest, the tall trees, there is
a silence one may rely on, I prefer personal
things, private notes
from me to the goddess who is cast
in bronze

I cross the bridge, this one is so simple, night
invades, it is almost Halloween and filled with a moon, the
poem has come
from the morning (of the pen), the words
are strung on high wire, I open the gate and cross quickly,
quietly, so who are you to put up a sign anywhere you please?
the arrow you aimed has come
down to the rose, the single rose, it is here
in the garden on the garden floor it is half hidden under fallen rust
of the tallest trees, I guess there is no way
to return, no way to tell you the same old love story, I love you,
I love to, I hope, I use the word to tempt myself deeper into the garden
I use love to feel safe,
if this is the city then count on me, there are rows of roses in bloom
and more statues and a praying mantis, and a bloodthirsty
demon

A MAN ALONE
By Neeli Cherkovski

a man alone
follows the creek from
the ring of mushrooms
to the estuary, he puts a finger
onto the sun at midday and
waits for the grave swans to dive,
his ashen eyes follow the sunset, his burnt
vision rise over the horizon, night
flows across the fields, a man
alone putting the moon
in his mouth, dreaming
of love, eating the
flowers that grow
on the clouds, following
in the wake of Dante
and a secret tribe of
criminal poets who bend
the truth across a stretch
of stream, a man alone
in a cave with his snake
and his eagle, eager
to cross into Beauty and
Truth, but stuck in the shadows
of his shelter
Posted by Christopher Luna at 11:39 AM