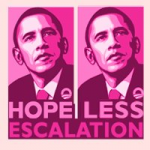 
The escalation in Afghanistan, the weak health care reform, detainee abuse not being shared with the public… on a number of issues I’m very disappointed in Obama. I hate being in a position where I’ll either be characterized as having “turned” on Obama for speaking out, or for being a “brainwashed cheerleader” if I give him more time to get it together. The last thing I want is to do is de facto strengthen the Republican’s position by attacking Obama, but I think he needs to be pushed. I don’t think Obama is a bad human being, I just think he is not being brave enough. In some regards I think Obama is just the messenger, letting us know he’s caved in to corporate and political forces we have all done too little to keep in check. I must qualify that by saying SOME people like Robert Greenwald and his Brave New Films team and MoveOn.org have certainly done their part to make righteous efforts. I’m disillusioned with the whole two party system. I’m baffled by some of Obama’s moves and many of the Democratic party’s moves. I’m confident that only campaign finance reform and vigorous participation from citizens, not corporations will change things for the better. Let’s all turn our dissatisfaction into positive action… talk-action=0.

Happy day of good will and peace on earth from a proud agnostic humanitarian. If a god made all this, he or she was quite mischievous if not mean-spirited.

Here is a great example of why a two party system is hopeless, voting for the lessor of two evils will always end in disappointment. It's to bad holding someone accountable for actions and words has to give the only opposing party more strength in the next election. The lesser of two evils is still evil. When will the violence and war end?