Thanks to David Abel for passing this along:

It’s the Berkson Difference Engine, hitting on the level of the syllable, illuminating arrays, pure products of daily utterance, mining one of the deepest veins of living vocabulary ever.
— Clark Coolidge

Details below — not to be missed! 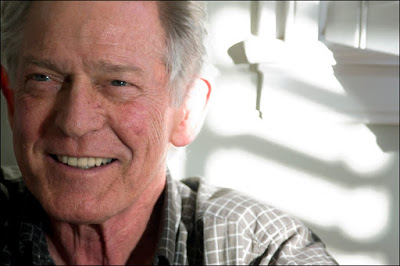 (To read more about Berkson's recent books, go to http://www.spdbooks.org/Search/Default.aspx?AuthorName=berkson)

Born in New York in 1939, Bill Berkson is a poet, critic, teacher and sometime curator, who has been active in the art and literary worlds since his early twenties. Director of Letters and Science at the San Francisco Art Institute from 1993 to 1998, he taught art history, critical writing, and poetry and directed the public lectures program there from 1984 to 2008. He studied at Trinity School, The Lawrenceville School, Brown University, Columbia, the New School for Social Research, and New York University’s Institute of Fine Arts.

He is the author of eighteen books and pamphlets of poetry — including, recently, Gloria, a portfolio of poems with etchings by Alex Katz (Arion Press), Our Friends Will Pass Among You Silently (The Owl Press), Goods and Services (Blue Press), and most recently, Portrait and Dream: New & Selected Poems (Coffee House Press).

A collection of his criticism, The Sweet Singer of Modernism & Other Art Writings, appeared from Qua Books in 2004, and Sudden Address: Selected Lectures 1981-2006 from Cuneiform Press, in 2007. A new volume of his art writings and interviews, The Ordinary Artist, will follow soon.

During the 1960s he was an editorial associate at Art News, a regular contributor to Arts, guest editor at the Museum of Modern Art, an associate producer of a program on art for public television, and taught literature and writing workshops at the New School and Yale University.

After moving to Northern California in 1970, he began editing and publishing a series of poetry books and magazines under the Big Sky imprint. Before coming to the Art Institute, he taught regularly in the California Poets in the Schools program.

In the mid-1980s he resumed writing art criticism on a regular basis, contributing monthly reviews and articles to Artforum from 1985 to 1991; he became a corresponding editor for Art in America in 1988 and also writes frequently for such magazines as Aperture, Modern Painters, Art on Paper, and others.

Past recipient of awards and fellowships from the National Endowment for the Arts, Artspace, Yaddo, the Briarcombe Foundation, the Fund for Poetry, the Poets Foundation, and the American Academy in Rome, he was Distinguished Paul Mellon Lecturer for 2006 at the Skowhegan School of Painting and Sculpture in Maine, and was awarded the 2008 Goldie for Literature from the San Francisco Bay Guardian.

Advance praise for Portrait and Dream: New and Selected Poems

“This is a generous selection of work by an important poet of the New York School. Known for his relationship to the art world, Bill Berkson writes a critically astute, witty (‘no rest for liquidity’), and lyrically present poetry. The push of his work is upward (buoyancy and spirit) and outward into the real—an elevator sitting upright in the snow, ash on the keys. His love poems assert especially what all of his work knows, that ‘the universe reinvents itself ceaselessly.’With each new life comes a new language, from the beauty of the everyday to the skeptical and postmodern. But the purely poetic, as seen in his wonderful translation of Heine (‘Selfsame source of all love’s flows— / Lily, dove, sun and rose’) is also present, with its binding force and knowing glance.” —Paul Hoover

“This is a keeper. A half-century of trenchant observations that never become cynical, of arcane knowledge (and gossip) neither obscured nor smug. Music and painting as natural as wind and light. ‘Logic can’t atone / Except the fun parts’ and ‘There is life in scatter yet.’ Indeed.” —Tom Raworth“

“Berkson [makes poetry] by means of a language and a form that are never what one expects but more exciting and to the point.” —Kenneth Koch

“Bill Berkson’s writing is witty, musical, daily and deep, underpinned by a bracing integrity and shot through with gorgeous abstraction and other brilliant hookups between eye, ear, mind and heart.” —Ron Padgett

“There was always something of a mythical aura about Berkson, the collaborator of Frank O’Hara and one of the chiefs of the New York School whose friends included painters as well as poets. . . . Berkson’s own poetry is subtle and demonstratively abstract in the manner of, let’s say, DeKooning: it has an imagistic hardness and lushness that sweeps aside whatever you might have been thinking before.” —Andrei Codrescu, Exquisite Corpse
Posted by Christopher Luna at 11:50 AM