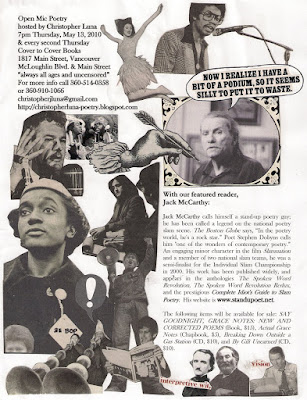 Open Mic Poetry
hosted by Christopher Luna
7pm Thursday, May 13, 2010
& every second Thursday
Cover to Cover Books
1817 Main Street, Vancouver
McLoughlin Blvd. & Main Street
“always all ages and uncensored”
For more info call 360-514-0358
or 360-910-1066
christopherjluna@gmail.com
With our featured reader, Jack McCarthy:
Jack McCarthy calls himself a stand-up poetry guy; he has been called a legend on the national poetry slam scene. The Boston Globe says, “In the poetry world, he's a rock star.” Poet Stephen Dobyns calls him "one of the wonders of contemporary poetry.” An engaging minor character in the film Slamnation and a member of two national slam teams, he was a semi-finalist for the Individual Slam Championship in 2000. His work has been published widely, and appears in the anthologies The Spoken Word Revolution, The Spoken Word Revolution Redux, and the prestigious Complete Idiot's Guide to Slam Poetry. His website is www.standupoet.net.

The following items will be available for sale: SAY GOODNIGHT, GRACE NOTES: NEW AND CORRECTED POEMS (Book, $15), Actual Grace Notes (Chapbook, $5), Breaking Down Outside a Gas Station (CD, $10), and By Gift Unearned (CD, $10). 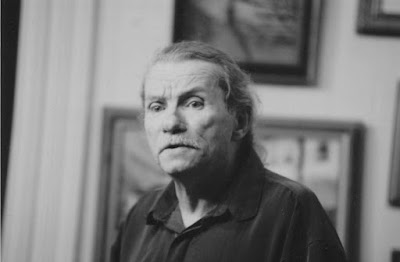 (Because you want to say something appropriate to the occasion,
but you you don’t want to look like you actually expected to win)

Unaccustomed as I am to public speaking,
I came today intending just to mingle,
To be content with praising, not critiquing;
With breathing the same air as Jimmy Tingle.
The categories here are very hard—
For instance, to distinguish Spoken Word
From Slam poetics challenges the bard
Who doubles as a judge. First? Second? Third?
The test, to cite Joyce Kilmer: what I’ve heard is,
Don’t talk about a tree, but show a tree.
At the other extreme, Spoken Word is
All the stuff we’re not quite sure is Poetry,
That seems it when performed, but not on page.
(I wrote this on my way up to the stage.)
Posted by Christopher Luna at 10:18 AM