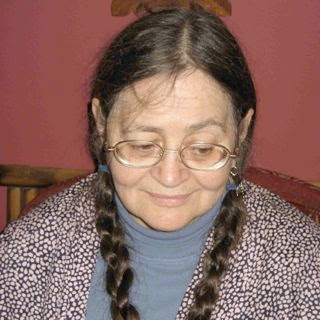 One of Oregon’s most beloved poets, Barbara Drake raises sheep, grapes and grandchildren on her small farm in Yamhill. Barbara is winner of many awards for both poetry and prose, and her memoir Peace at Heart was an Oregon Book Award finalist. Her college textbook, Writing Poetry, has been in print and continuously used in colleges across the country since 1983. Barbara's work is both grounded and ever-changing.


Brittany Baldwin combines fabulous cookery with extraordinary poetry and writing. She has cooked and catered professionally for almost 20 years. She currently owns and runs a personal chef catering company, and grows many of her own vegetables and herbs herself organically on her small homestead. Her first collection was Broken Knuckles Against Knives Cutting The Food to Feed Me Through This. She’s won awards for both cooking and poetry.
Barbara LaMorticella has co-hosted Talking Earth on KBOO since 1988. Her second collection of poems, Rain on Waterless Mountain, was a finalist for the Oregon Book Award. She’s won a Stewart H. Holbrook Award for Outstanding Contribution to Oregon Literary Arts, a Bumbershoot Big Book Award, and in 2010 the first Northwest Poets Concord Prize. Her newest collection is “The Great Dance,” poems 1969 to the present. She lives in the woods outside Portland.

THE SENSITIVE
by Barbara Drake

The truly sensitive are better than you and I, their ears flap shut at the slightest unpleasantness. To soften their passage, sleeping mice curl in the toes of their slippers. Their tongues are coated with microscopic light-emitting diodes and when they open their mouths an ethereal glow comes forth like that of a firefly caught in an old mayonnaise jar. When they move the world doesn’t jangle or slap like seawater in a rocky hollow the way it does with the rest of us, but slides past with a gentle shussing. We cannot imagine anyone having given birth to them, for their heads seem too fragile to have ever been squeezed into existence in this rough animal fashion.

EXCERPT FROM "AND THEY DO, AND IT DOES"
by Brittany Baldwin

Refusing to settle for the expectations of my form
I run my hands over butter
and smudge it across the bottom of a hot pan
with my fingers lightly.
I close my eyes instead of looking for you,
I close my eyes and think of all the men
I’ve tried to explain this to,
but before I have a chance
they’ve already decided I must be gay,
I must’ve been beaten,
I’m way too damaged to be here on the other side
of things
mixing fire and metal on food.
Scared of the work in your hands,
settling against doors of misunderstandings
trying to create love,
trying to form love into a shape in my hands,
when there is only work
I am only working food through my skin.
They cannot see the rhythm,
they cannot see the processes,
they only see me with my eyes closed
in a cloud of stress and time...

Talking Earth Monday Night September 20
10-11 PM Pacific Time
KBOO, 90.7 FM Portland
Hispanic Heritage Month: Joann Ferias and Cindy Williams Guitterez bring poetry and music in honor of Hispanic Heritage Month to Talking Earth on Monday September 20. To open the Miracle Theater’s 2nd-annual festival of Hispanic Arts and Culture, Guitterez has teamed up with writer-storyteller Lynn Darroch and musician Gerardo Calderon to stage Dreaming the Americas: Encounters/Encuentros. Encuentros is a journey through the Americas from south of the border through the Northwest, narrated through the dreams of spoken word artists, and accompanied by the rhythms of Latin guitar and cello and the haunting sounds of pre-Hispanic instruments and Didgerido. Cindy and Gerardo preview and talk about the show, the theater, and the celebration.

Los Portenos is a lively group of Hispanic poets that has crystallized around the Teatro Milagro. Joann Ferias brings some of Los Portenos to share the air with Guitterez and Calderon.

THE BOY IN THE BALLOON
by Barbara LaMorticella

For Falcon Heene, who vomited at a press conference when asked
to vouch for his father’s lie that Falcon had accidentally cut loose his father’s
home-made balloon and then hid. The whole thing was actually his father’s
elaborate publicity stunt. Millions watched the untethered balloon fly

Watching as the balloon raced,
we grew so much bigger than ourselves.
our hearts came out of the basement.

We, too, were caught in an updraft,
spiralling unmoored, untethered from earth.

We floated with the six year old,
tossed and buffeted,
our world out of control,
not knowing where we would end
what field we would find ourselves in
when we came down.

Only when the balloon crashed
did we realize the ride we’d really taken
had never left the earth.
The wizard was only a con man.

The single grace note in the story was
the vomiting of a boy
who wouldn’t lie.
Posted by Christopher Luna at 9:45 AM