"Innocent Deflowered by a Paper Tiger Under an Orange Moon:" Congratulations to Jenney Pauer and a new collage poem by Christopher Luna

Jenney Pauer's reading on Thursday night was brilliant. What amazes me is how real she is, as if the events described in her poignant poems had happened moments before. You cannot fake the kind of raw emotion that she exhibits in performance. You either feel it, or you don't. Jenney is able to put herself right there, and we go along with her. Inspiring. She shows us how it should be done.

The open mic was one of the best poetry readings I have ever attended. I alternated between laughing, crying, and staring ahead in astonishment. For example, I wept uncontrollably at the finish of Dennis McBride's incredible piece which invites us to contemplate that Hitler may have once had love in his heart. Or Jeff Samuelsen's hilarious depiction of an estrogen-fueled Western. What a great night.

What follows is a collage poem that incorporates lines from poems and offhand comments I heard during the course of the evening. I should warn you that it gets a bit filthy, so if that's not your thing, move along. If you want to know who said what, I've included a key below the poem. 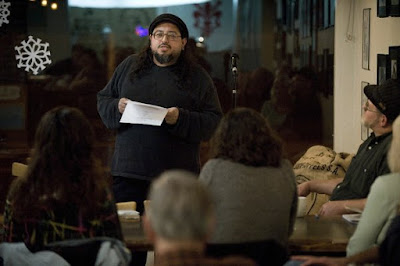 Innocent Deflowered by a Paper Tiger

Under an Orange Moon

It was her first reading and
I saw the notebook spin
beneath her trembling fingers
tentative phrases spiraling forth
from the paper into the air
winding ‘round the mic
like the heart’s secret yearning.

Stumbling, sincere,
thinking about picking up
an electric typewriter
she opens her mouth and begins to speak:

“There’s this great big fucking moon out there tonight. I didn’t really expect her to touch my vagina through my pants. Flirted with the paleontologist. He invited me up to his penthouse. I was discovering what it means to be a woman—never mind, I won’t explain that. I talk a little funny because I had oral surgery. I’ve never had any power in my relationships. I have a slight disposition. Red and pink parts. I covet like a motherfucker. Alluding to purity. None of us have any salvation. The sound of salvation is the sound of shame. But I can breathe. Thanks for listening to my ventations.”

There’s this great big fucking moon out there tonight. . . . None of us have any salvation. Ric Vrana

I was discovering what it means to be a woman—never mind, I won’t explain that. Mary McIntosh

I talk a little funny because I had oral surgery. Christi Krug

I’ve never had any power in my relationships. . . . The sound of salvation is the sound of shame. But I can breathe. Mike G

I have a slight disposition. Rhonda Grace

Thanks for listening to my ventations. Darlene Costello
Posted by Christopher Luna at 9:04 PM