Those who attend poetry readings in Vancouver, WA are aware of Dennis McBride's sardonic wit, high speed verbal pyrotechnics, and amazing facility with the language. The community has completely embraced both Dennis and his stalwart traveling companion, Mike G, neither of whom misses an opportunity to share their work with the folks at Cover to Cover and Paper Tiger. 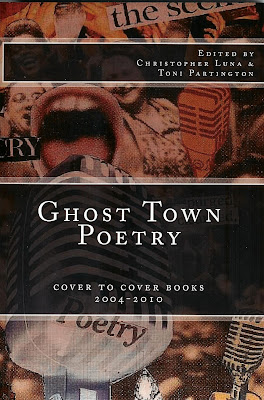 Dennis recently read the following statement about Ghost Town Poetry (available through http://covertocoverbooks.net or http://www.amazon.com/Ghost-Town-Poetry-2004-2010-Anthology/dp/1461075114/ref=sr_1_1?s=books&ie=UTF8&qid=1312469042&sr=1-1), the anthology of poems from the long-running Ghost Town Poetry open mic edited by myself and Toni Partington. I reprint his comments here with his permisssion. I am very grateful to Dennis for all that he contributed to the scene, and for his kind words of encouragement: 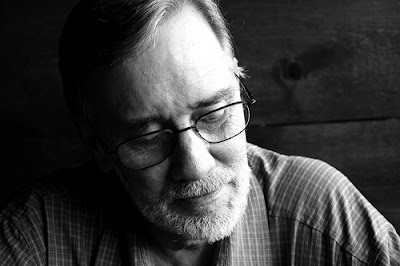 Dennis McBride
Photo by Elizabeth Archers
Butch Cassidy and Sundance ride into Ghost Town
Hats off to Chris and Toni. Ghost Town is such a genuinely remarkable carousel of what poetry can do that if it were sent out on another Voyager mission and discovered by extraterrestrials it would allow them to know what being a human being on the earth was like. There are so many good, well-crafted poems in this anthology that each one calls out for attention because, as Stafford said, "poetry is about a certain kind of attention," which Ghost Town delivers.
I selected and focus on Kyle David Congdon and Alex Birkett only because I'm interested in the voice as it relates to personality, or the voice behind the voice in their poems.
I'm not really stalking them. I'm not gay--really a closet heterosexual--and that's more information than you wanted I'm sure.
But I'm also focusing on their poems because, by way of example, I think they shed light on the other work in this volume and poetry in general.
Congdon's "So...But...Sleep" and Birkett's "Avoiding the Light" and "Styx" illustrate what the best poetry should do, which is to successfully seduce the intellect's heart (a function generally denied to science) and hijack the intelligent head, stop it in its tracks, hold it hostage for ransom from the heart's mysterious negotiable currency. Another measure of these poems' power is that they pull you in but do not release you; something occult and transcendent pulls you back, which is partly that the poem's voice is trustworthy and solid, scattering breadcrumbs that will lead out of the forest and into Thomas Wolfe's "lost lane into heaven," but it's also the under-appreciated unexpected presence of surprise that is really the life blood of poetry and which is interstitially woven into the fabric of these poems. There are instances in the poems where meaning is elusive but it's the fact that one is not bothered by that which sends a signal that one is in the neighborhood of the sublime, and in these poems it is the continual reappearance of the unexpected that sends that signal; you are taken somewhere which bypasses the brain's stifling seat of reason, and yet are given unforgettable lines like Kyle's "I know forever about the unfinished endless visious" followed shortly by "you need to breathe, Butterfly," which sums up the totality, setting out travail and treatment better than a PhD thesis or the Diagnostic and Statistical Manual of Mental Illness, and there is the vastness of the intelligence in Birkett's "Avoiding the Light," which rescues humanity from its isolating, isolated morass of smothering morality  by celebrating our pleasure principle, not "east of Eden" but somewhere left of "whoopi." And then to turn around in "Styx" and in a few short lines juggle the see saw transition from tenderness to the heart's rage left me wanting more. Even porn can't do that. I just wanted to stay in the Ghost Town poems and go back and forth like a child in a swing.
Dennis McBride
2011
Posted by Christopher Luna at 8:20 AM

Hi. My name is Heather. My parents were both friends of Dennis McBride years ago, and I met him when I was a teenager. We have lost touch with him and would very much like to reconnect. Any help you could provide would be greatly appreciated. Thank you so much.